Below pictures demonstrate a cryotherapy of Ledderhose. The therapy was performed by Dr. Steven Goldstein, (www.footfreezer.com) on . Dr. Goldstein and the patient, David Adams, have kindly approved this publication.

Further appended are reports from two more patients, Judy Weigand and Bhaskar Sengupta, who also had cryotherapy  (see below).

Nodules on both feet. Walking difficult but otherwise no pain. 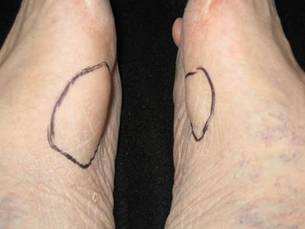 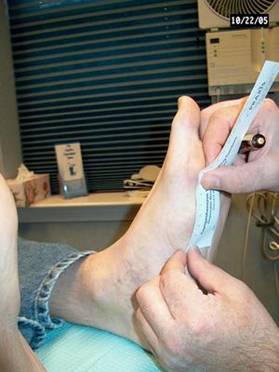 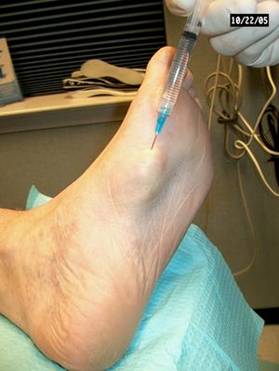 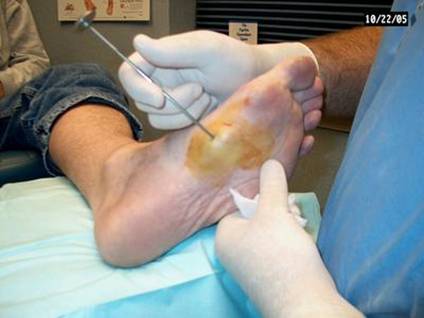 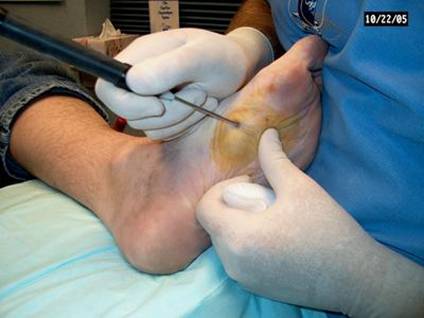 Post-treatment: steroid injection to increase the effects of the cryotherapy by further breaking down the nodule´. 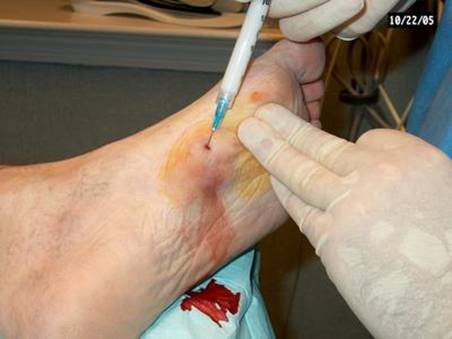 “The surgery took 1.5 hours and consisted of inserting a long needle like object into my foot.
The object was about five inches long and at least as thick as a basting thermometer. Due to the extent of my nodules, a lot of freezes took place. I would guess about 15, but I sort of zoned out
after a while. Only one incision point was needed on each foot. The needle was long enough to treat a nodule over 3 inches away from the entry point. I experienced almost no pain during the stuff. The doctor used a lo numbing agent with the option of temporarily deadening the nerve to the foot. I never ended up need that to be done. He was surprised that I had a high pain threshold, but in reality I just didn't have any pain. Maybe this explains why my nodules never hurt much
even as big as they were. I assume my nerves in that area are not very sensitive. Both feet
are bandaged up today, with the bandages coming off tomorrow. … I drove myself back to my hotel. I decided to stay the night in the area just in case they hurt. I was up at Sunday and back in by walked the whole way. Walking is a little painful today, but nothing much. Since I had no pain before, it probably seems painful to me - but to some of you - it would probably be an improvement over normal.”

“I also have wondered about recurrence with Cryotherapy.  The patient I know of has had no growth for over a year after her surgery.  I heard this from the Dr, not the patient herself … the 2,000 $ I paid for both feet includes a second round within six months if I need additional lump reduction.”

Patient’s comments: “The 30% to 50% reduction is based on visual inspection, feeling and far looser skin.  Good news so far.  I led the Dr and he indicated it was not uncommon for reduction to keep occurring in the 2nd through 6th weeks.  …  I guess that my right foot had a 40% reduction and the nodule is no longer hard like it was.” 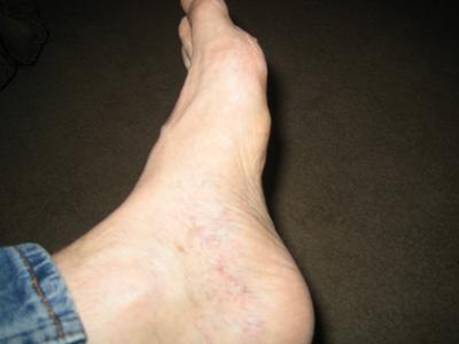 Patient’s comments: “I am completely recovered from surgery and just did 50 miles of hiking
over two days to see how it helps up. It is good to be pain free in the enduro business again. I would definitely recommend it.

As for me, I am going to try to schedule a follow up treatment soon so I can further reduce the nodules. This isn't perfect, and isn't cheap - but I feel it works. I guess we will see how long it holds up in a year or two.”

Another patient, Judy Weigand, had cryotherapy on , also by Dr. Goldstein. Her feelings after the treatment were initially more reluctant, and we publish her comments and log with Judy’s approval:

March 18 – 28:  Very little noticeable difference in size of lumps.  Some numbness in right foot – ball of foot and big toe especially.  I have spent several days being discouraged that I have seen so little improvement.  David and Dr. G told me I need to be patient.

March 29 – Beginning to feel that there is small improvement in numbness.  The lumps are still large, but noticing some loose skin over one on left foot.  Both feet still fairly sore when I stand for very long.

March 30 – No noticeable difference today.  Trying not to get too impatient.

March 31 – April 1 -  Still the same.  My feet are still very tender and finding shoes that feel good is almost impossible.  It almost seems as if they are more painful than before.  Numbness still present although the affected area is also starting to hurt more, as when lip stings a bit from wearing off of novacaine.  At least that's what I'm hoping.

April 2 – Finally, I am seeing some progress.  For first time I can see that the lumps are somewhat smaller, softer to the touch, and there is more loose skin around them.  Numbness also seems to be a little better.  Also, feet are not as painful.

April 3 – Lumps were hard as rocks when I woke up. After walking on them, they seem a bit softer. Partial numbness is still very present and my toes burn and sting a lot.  I'm still hoping for more
reduction in size and less pain.

April 4 – Feet seem fairly sore this morning and lumps again hard when I got up.  No more reduction.  When I have been on my feet and then sit down, I sometimes get sharp shooting pains in the area of the surgery.  Still not ready to say this was a good deal!!

April 4 (forum): “Right now the jury is still out on how successful I feel it was, though I am starting to have some glimmer of hope.  …  There have been days I wanted to sit down and cry thinking that I've made things worse with this procedure.  …  I also have had some nerve involvement, especially in the left foot, with the result that the ball of my foot and most of my toes are now partially numb.  The Dr. assures me they will come out of it and the nerves will regenerate, but it will be a slow process.  So far it certainly is.”

April 5, 6 – The lumps are about the same. No more apparent reduction at this time.  Still somewhat painful.  The good news is that the numbness seems to be lessening a bit.  Have been on my feet quite a bit the last couple of days.  They don't feel very good right now.

April 7 – No change so far.  No reduction in size and feet still painful to walk on.

April 8 – No change again today.  It's been three weeks.  I'm getting discouraged.

April 9 -10 – Looked at before pictures.  There is definitely a reduction in size, but it's hard to tell how much.  Not enough to get real excited about at this point.  Numbness is slowly improving.  Weight bearing is still painful.  Hope that improves.

April 12 – Looked at pictures again today and realize that the lumps really are quite a bit smaller. They started out so large that even with this much reduction, they are still somewhat large and I think I just didn't realize the progress.  Feet are still sore, but that may take a while to get over.  Numbness still present, but not as bad.  I imagine that what I see now is probably the best that they will be.

April 14 = Things seem to be in a holding pattern right now.  I suspect that this is as good as it will get, though I hope the numbness will continue improving.  My feet don't feel perfect.  They are still healing from the surgery, but the reduced lumps are not nearly as painful to walk on anymore.  I suspect I will have the second round of this at a later date.

April 18 (forum): “It has been a month today since I had cryosurgery on both feet for plantar fibromatosis.  Dr. Goldstein performed the procedure.  He is the same doctor who did David's.  The results have been somewhat of a mixed bag.  There is quite a bit of reduction in both of my feet, but it's hard to tell how much as there were large lumps on each, and they still are somewhat large.  In addition, the right foot has some residual numbness in the ball of my foot and my toes.  This should go away, but it may take awhile.  In the meantime, there are days when my feet feel fairly good, and others when they hurt to stand on for any period of time. I realize that it will likely take even more time for them to heal, but overall I feel fairly positive about the procedure and will probably have it done again sometime later.  The procedure itself was a bit unnerving for me as I have a rabid phobia against needles and he put enough in my feet to almost send me over the edge - the result being that I shook throughout the whole procedure instead of zoning out as David reported that he did.  Once they were numb, however, there was absolutely no pain.”

April 19 (forum): “At this point I am fairly well pleased with the surgery, although the partial numbness is a little bothersome.  But I feel it will go away eventually and I do plan to have another round.  David asked how much reduction I have, and it is a little hard to tell exactly, but I would guess around 40%.  My feet mostly feel okay, but I still have to be careful which shoes I can wear so they don't start hurting.”

I am sharing my experience but should caution that my Ledderhose problems are not as bad as those of many other people and trajectory of my illness may have been quite different from others. The experience with surgeries and other treatments is quite varied so it is quite difficult to make informed conclusions if you are suffering from Ledderhose disease.

First, you need a podiatrist for your feet, not a Dupuytren's doctor. I was faced with the problem should I do early intervention even though I could get by on orthotics that my podiatrist had made for me or, should I wait for the problem to become unbearable? I opted for early intervention and got two sets of cryosurgery done on my right foot (Feb 2007 and Sep 2007). After these surgeries, the scar tissue that formed from the surgery bothered me and caused a fair amount of pain. This was mainly in the form of a corn (hard skin) that hurt me when I walked, even with orthotics. Things became worse than what they were before the surgeries. In January 2008 my podiatrist performed another surgery on my foot, this time a knife surgery, and removed some more tissue, and that corrected my problem. Since these surgeries, my recovery has been good. I can walk without orthotics in my regular shoes and I experience no pain or discomfort.

However, since this is a progressive disease, I fully expect the problem to recur. Thankfully in my case the nodule is growing on the inner side of my right foot, close to the high point of the arch. Since the new growth after surgeries is not on the sole of my foot, it is possible that the new nodule growth will not interfere with walking. In any case, my problem was not very serious even when I began treatment. While my experience with these surgeries has been good, it is impossible for me to say what it would be for others. Compared to other patients, who have been suffering over a long period of time, I consider myself extremely lucky.

After these surgeries, I still continue to grow a small amount of hardened scar tissue which I remove with a X-Acto No. 1 knife myself (this is definitely not recommended for everyone!) once every two months and I also treat the site with Mederma which is supposed to help with scar tissue.

Cryo has worked well for me because I can walk without orthotics now and have done so for over a year. However, since the disease is so very different in different people, I still hesitate to give a blanket recommendation for any particular treatment.