Radiation therapy for ’s Contracture in the UK

I am probably the first person to be treated by radiation therapy for ’s Contracture in the , so I thought I’d write about my experiences here.

It was back in December 2006 when I first became aware of a painful lump on my right hand.  It was about 2cm below the base of my ring finger and it was most noticeable when I was typing.  I assumed it was probably some form of repetitive strain injury.  In the way of those who are embarrassed to ask about things that are probably something very trivial, I mentioned it as a throwaway remark to the doctor, as I was leaving after a consultation for something completely different.  He said it was probably an inflamed tendon and that rest should help it (which merely goes to show that if you want something to be looked at properly, you really should make a specific appointment).

Rest didn’t seem to help much, so I mentioned the lump to a friend of mine who happened to have some free time and asked him if he had any idea what it could be.  He went away and did a lot of research on the web and came back to me and asked about the shape of the lump and whether it moved around when you move the skin, or whether it stayed in the same place as the underlying structures while the skin moved above it.  When I told him that the lump appeared to extend a little along the tendons and the skin moved with the lump, he came back and said that he thought I had ’s Contracture.   He also gave me a link to this web site www.dupuytren-online.info .  I looked at the photo on one of the ’s pages and went ‘Bingo!’ That could have been a photograph of my hand. 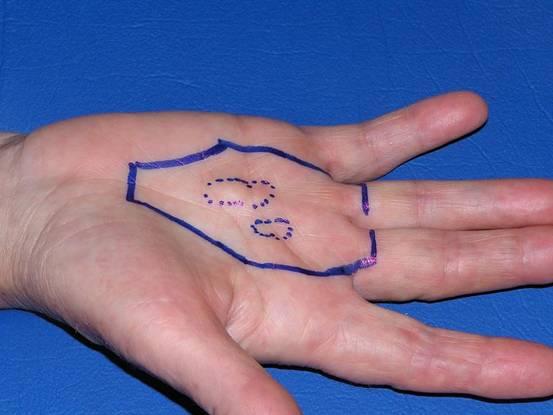 I printed out loads of information from the web site and went armed to visit my doctor.  It was clear from careful reading of everything on the Dupuytren’s section of this site that radiation therapy was the most appropriate treatment at this early stage of the disease.

Hurdle number one.  The doctor wasn’t interested in looking at my print outs.  He looked at his own web site which didn’t seem to agree with my diagnosis.  Although I couldn’t see the screen from where I was sitting, I could tell from what he was saying that his web site did not have information as detailed as that on the Dupuytren Society’s site and that he was assuming the growth on the tendons always went towards the fingers – mine is growing downwards.  He was either Indian or Pakistani and Dupuytren’s is very rare in these ethnic groups.  Although he said he’d heard of Dupuytren’s Contracture, he’d never actually seen a case.

I stuck to my guns, insisting that it was ’s Contracture.  He led in a second doctor (English ethnicity), who took one look and said it was classic ’s.

Hurdle number two.  The second doctor had never heard of radiation therapy being used to treat Dupuytren’s.  Apparently the standard treatment in the is to wait until the fingers are badly bent and then to operate.  I said I wanted radiation therapy.  The doctor said he’d refer me to a radiologist to confirm the Dupuytren’s.

The National Health Service moves slowly…  A month or so later, I saw the radiologist who did an ultrasound scan and confirmed that it was indeed Dupuytren’s.  He also discovered lumps in the palm of my left hand that I’d been unaware of, as well as more lumps in my right hand.

So, a couple of months later, I saw the hand surgeon.  He’d been told by my doctor that I was interested in radiotherapy (bonus point to my doctor), and he agreed to refer me to a radiotherapist.

A month or so later, I saw the radiotherapist.

Here’s where my luck took a turn for the better.  Dr Goode is used to treating benign growths with radiotherapy and although he’d never used radiation to treat Dupuytren’s before, he looked at my notes from the Dupuytren Society’s website and agreed almost immediately to give it a go.  I was gobsmacked!

A couple of weeks later, I was having my first radiotherapy treatment at the Dorset Cancer Centre (it’s in ).  I had two separate courses of treatment six weeks apart.  Each course was five days long.  Individual sessions were quite short, only taking a few minutes.  I got to know some of the radiologists quite well; they’re a very friendly and welcoming group of people.  I got chatting to one of them about music – he’s a guitar player -- (one of the reasons I was so keen to treat the Dupuytren’s before the contracture became too far developed was because I play several musical instruments and this would become impossible if I couldn’t straighten out my fingers).  For some of the last sessions, I took in a concertina and a bowed psaltery to show him.