Patients were invited through email or forums and encouraged by surgeons to participate in this online survey. There was no filtering or randomisation of participants. Most participating patients had already been treated but about 20% had no treatment yet.

The survey was an internet based questionnaire, which took about 5 minutes to fill out. It was considered important to keep the survey simple and easy to understand and easy to fill out. The survey addressed patients with Dupuytren and / or Ledderhose disease.

Goals of this survey

The primary goal of this survey was to understand how patients perceive the quality of treatments for Dupuytren and Ledderhose disease. Additionally addressed were the quality of consultation, the age of disease onset, and the effect of life style (smoking, drinking). Also explored were related diseases and potential country specific differences. While the above questions were addressed directly, an additional open ended question tried to understand the specific needs of patients with Dupuytren of Ledderhose disease, respectively.

This was a global survey where anyone could participate. Responses came predominantly from the USA and from Europe. 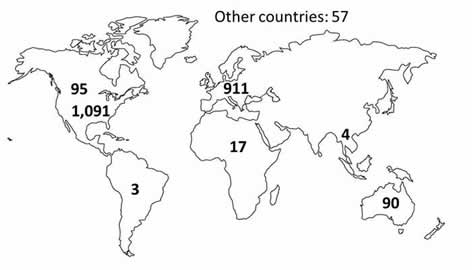 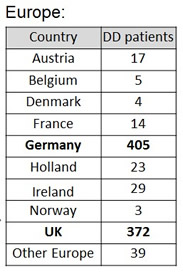 Dupuytren disease starts earlier in men than in woman. Below results seem to suggest that it starts about 10 years earlier for men but that is due to the 10-year age grouping. The average age of onset (meaning the age of first symptoms, NOT of first treatment) is 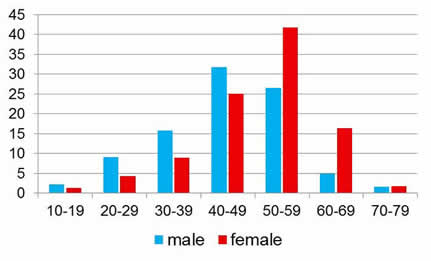 Patients were asked to rate the outcome of their treatment of Dupuytren‘s. Several treatments could be rated using a scale from 1 - 10, with 1 = made it worse to 10 = very successful. Results are summarized below. "Other treatments" is covering a broad range of treatments, none of them with enough participants to justify a seperate column. The good ratings in that group are essentially anecdotal and not necessarily menaingful for other patients. 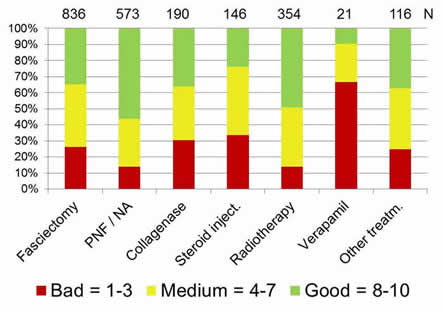 Ledderhose disease also starts earlier in men than in woman.

Patients were asked to rate the outcome of their treatment of Ledderhose disease. Several treatments could be rated using a scale from 1 - 10, with 1 = made it worse to 10 = very successful. Results are summarized below.

The best rated treatments for Ledderhose are radiotherapy and cryosurgery; the latter seems to be available only in the USA.