A wide variety of techniques is being applied for surgery of Dupuyten's contracture. Our overview describes some frequently used techniques but cannot cover all variants. Dupuytren himself in the 19th Century used to not remove the cord but to just cut it (a so-called fasciotomy) and thus regain flexibility of the finger, similar to today's less invasive NA technique. Improvements in surgical techniques, anesthesia, and hygiene in the 20th Century made it possible to safely remove larger amounts of tissue in an attempt to reduce recurrence of the disease. Those attempts to remove all of the diseased tissue, unfortunately, still showed some recurrence, required significant longer recovery, and exhibited more severe side effects. Therefore later several techniques of reduced surgery were proposed. The goals are faster recovery, less side effects, without increasing the rate of recurrence.

The recurrence rates given below are actually coarse estimates for several reasons. Though many publications provide numbers on recurrence rates, the definition of recurrence varies. Recurrence might mean for example that the finger had to be treated again, or that the condition just got worse after treatment, or that the condition got worse resulting in a higher Tubiana stage of the disease. All those definitions are actually being used. Obviously also the analyzed period of time is important ("In general, the longer the follow-up period, the lower the percentage of good results" Weckesser_full article). Often also the provided numbers are based on a relatively weak statistical set of data. Further difficulties arise fom the influence of the surgeon's skill, the patients's age, the patient's condition ("Patients with Dupuytren contracture vary greatly in their propensity to reform contracture" - see Weckesser), the strong dependence on the affected finger and joint, and the - rarely assessed - extension to other areas potentially triggered by surgery.

Generously removes all of the diseased tissue and often also the aponeurosis which is sometimes believed to be the source of the disease. Due to higher risk of functional loss of the hand this techniques has become less popular in the last few decades. Recurrence rate estimated 20 - 40 percent after five years.

Currently probably the most frequently applied technique. The diseased tissue is completely removed and sometimes also parts of the aponeurosis. The range of reported recurrence varies widely: "In an exhaustive review of the literature, McGrouther (1990) found percentages of recurrence oscillating between 2 and 63%" (see Moermans, chapter 14.5). On average the recurrence rate might be 40 - 50 percent. A retrospective cohort study by D. Schwartz covering 322 patients 4 years after surgery recently reported a recurrence rate of 44 % ("Dupuytren's Diathesis Revisited: Evaluation of Prognostic Indicators for Risk of Disease Recurrence", J. Hand Surgery 20 (2007) 280-281abstract. A randomized prospective trial by van Rijssen et al. observec a recurrence rate of only 21% after 5 years abstract (recurrence here defined as an extension deficit of more than 30 deg)..

Removes only the nodule (sometimes also the cord) and leaves in place the aponeurosis which is not considered as critical to disease development. Depending on the disease's stage cords will be cut but not fully excised (subcutaneous fasciotomy). "If it be true that the nodule is the essential lesion, and my studies indicate that it is, it is not necessary to do a radical excison of all the palmar fascia and associated fibrous cords" (J. Vernon Luck "Dupuytren's Contracture - A New Concept of the Pathogenesis Correlated with Surgical Management" Journal of Bone and Joint Surgery (1959) p 635-664 abstract). The recurrence rate is probably similar to partial fasciectomy.

Only segments of the Dupuytren's cord are removed allowing smaller surgical intervention and faster recovery. "The basic postulate of segmental aponeurectomy is that, if we can create a permanent discontinuity in the retracted aponeurotic band without wide dissection of the fascia itself, then the retracted band from which tension has been eliminated will disappear or at least cease to act as a contracture." (Moermans). The recurrence rate, according to Moermans, is about 35 percent (but Moermans' definition of recurrence is very pessimistic, other researchers would have probably reported a lower recurrence) and depends strongly on the affected finger and the affected joint, an effect that is often ignored in other publications.

Dermofasciectomy removes all of the diseased fascia plus a generous amount of the overlying skin which is replaced by skin from other parts of the body. This technique is one of the larger surgeries but is reported to have a very low recurrence rate of about 10 percent (not for cords but for a more diffuse variant of Dupuytren's disease, see e.g. J. R. Amstrong et al. "Dermofasciectomy in the management of Dupuytren’s disease" J Bone Joint Surg [Br] 82-B (2000) p 90-94 full_article). Again, results may partially be influenced by the measurement of recurrence: recently a randomized trial did not exhibit improvement by dermofasciectomy "The recurrence rate was 12.2%. We did not identify any improvement in correction or recurrence of contracture after firebreak dermofasciectomy up to three years after surgery." A.S. Ullah et al. "Does a 'firebreak' full-thickness skin graft prevent recurrence after surgery for Dupuytren's contracture?: a prospective, randomised trial." J. Bone Joint. Surg. Br. 91 (2009) p 374-8 abstract. Further readings http://www.lynndketchum.com/surgeries.htm , Moermans Chapter 15. The benefit of dermofasciectomy might be related to observations reported by Pasquali-Ronchetti et al. "A clinical, ultrastructural and immunochemical study of Dupuytren's disease" J Hand Surg [Br] 18 (1993) p 262 -269 abstract. The authors observed cells similar to the obviously diseased nodule areas also in other, seemingly not affected areas of the skin.

Probably for all surgical techniques, including needle fasciotomy (NA, PNF) and maybe also collagenase injection (not researched yet), recurrence also depends on the patient's age at time of treatment. For more details see http://www.dupuytren-online.info/NA_side_effects.html.

In some cases the resulting finger extension after surgery can be further improved by additional measures. Below are two examples. 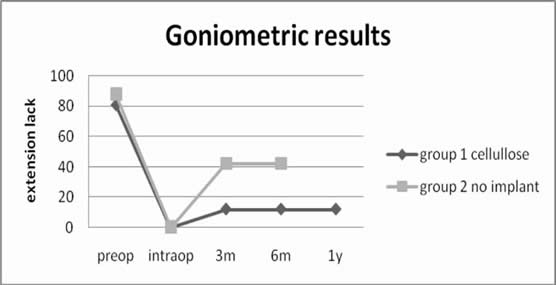 While the results immediately after surgery were equally good for the implant and the control group, the longer term resuls of the group with cellulose implants turned out much better. Patients were high risk patients with strong diathesis, the surgical technique was segmental aponeurectomy as described above. 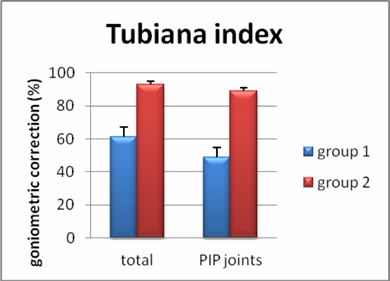 Immediately after surgery the hand is bandaged. After a few days careful exercises will get hand and fingers flexible again. This kind of physio training should be supported by an expert. Various techniques are being used to excercise the hand, we refer e.g. to Benson et al. "Dupuytren's contracture" J Am Acad Orthop Surg. 6 (1998) p 24-35. "The mainstay of postoperative hand therapy is early active-flexion range-of-motion exercises to restore grip strength. A nighttime extension splint is often used for several months postoperatively to maintain the correction achieved in the operating room." Yet strong mechanical stress in the early stage of wound healing should be avoided (Evans RB, Dell PC, Fiolkowski P " "A clinical report of the effect of mechanical stress on functional results after fasciectomy for Dupuytren's contracture." J Hand Ther 15 (2002) p 331-9 abstract).

To maintain flexibility of the hand during the day and to avoid damage at night, splints are usually worn at night. Below is a comfortable night splint that can also be used after needle aponeurotomy. The period of wearing a night splint varies strongly, with some patients wearing night splints up to 6 months. 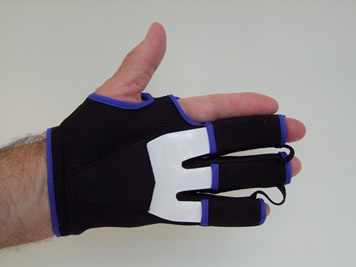 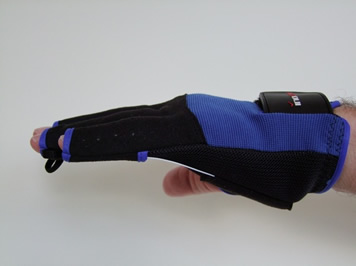 Because we received several inquiries about the above night splint here is a link to an Internet shop selling it: FixxGlove_Internet. This is no advertizing, Dupuytren Society has no commercial interest in selling this splint and we do not rank this splint relative to others.

An example of a simple but convenient custom made night splint is shown on our NA page.

Finally, we would like to note that the positive effect of wearing a night splint, though it is generally recommended, has not yet been proven by strict scientific standards, see C. Jerosch-Herold et al "Night-time splinting after fasciectomy or dermo-fasciectomy for Dupuytren's contracture: a pragmatic, multi-centre, randomised controlled trial" BMC Musculoskeletal Disorders 2011, 12:136 abstract. The authors find no evidence for the effectiveness of splinting after surgery. They themselves indicate that results might differ for splinting after NA.

A positive effect of wearing a night splint regularly, even without prior surgery, is reported in C. Ball and J. Nanchahal "The Use of Splinting as a Non-Surgical Treatment for Dupuytren's Disease: a Pilot Study" Hand Therapy 7 (2002) p 76-78 full_paper.