Needle Aponevrotomy, in the USA often abbreviated as NA and also called needle aponeurotomy or percutaneous needle fasciotomy (PNF), is a minimal invasive technique that originally became popular in France more than 30 years ago. The aim of NA is to make contracted fingers functional again by straightening them while maintaining minimal side effects. The technique uses needles to puncture the contracting (blocking) Dupuytren cord and thus weaken it until it can be broken by mechanical force, typically with a characteristic snap. NA (needle aponeurotomy) is a non-surgical, ambulant, outpatient procedure. The French doctors in the 20th century were the first using a syringe (the "needle") to break the Dupuytren cord. The cutting of the cord is in medical terms a "fasciotomy". According to Eliot the first fasciotomy was already performed with a surgical knife by Cline in London in the late 18th century; fasciotomy was also suggested by Astley Cooper in 1822 and Guillaume Dupuytren in 1832. The advantage of using a needle for damaging the cord rather than a scalpel is the much less damage to the hand and thus the much faster recovery after the treatment.

"Before / after" examples of needle aponeurotomy/NA treatment are e.g. shown on the site of the former Handcenter in Jupiter, FL, ehand . Another impressive example, including a video, is shown on Dave's Dupuytren's contracture. Below examples include results after 6-8 months and links to several videos showing NA live.

NA (needle aponeurotomy or needle fasciotomy) has gained high popularity in France and in the mean time also in the US, the United Kingdom and Germany. The reason is that it usually succeeds in getting bent fingers straight and functional again, takes very little time to apply, requires only local anesthesia, creates no or minimal scarring, provides a fast recovery, is less expensive than surgery, can be repeated, and is typically fairly painless.

Below pictures were provided by A. Meinel, Dupuytren Ambulanz, Germany. The good results documented here should not hide the possibility of recurrence of Dupuytren's contracture after NA. The probability of recurrence after NA (PNF /needle fasciotomy) is higher than after thorough surgery. Pess et al. reported 2012 in a retrospective study that after 3 years 20% of the treated MCP joints and 65% of the treated MCP joints had a recurrence of more than 20 degree contracture.Van Rijssen et al.reported 2012 that after 5 years 85% of the needle fasciotomy group showed recurrenc, as compared to only 21% of the limted fasciectomy (= classical surgery) group. An overview is provided in Werker PM "Percutaneous needle fasciotomy/needle aponeurotomy (PNF/NA)". Version 2016-04-27. In: Handchirurgie Weltweit e.V., Böttcher R, editors. Living Textbook of Hand Surgery. Cologne: German Medical Science GMS Publishing House; 2014-. DOI: 10.5680/lhhs000014. See also needle_fasciotomy_side_effects. 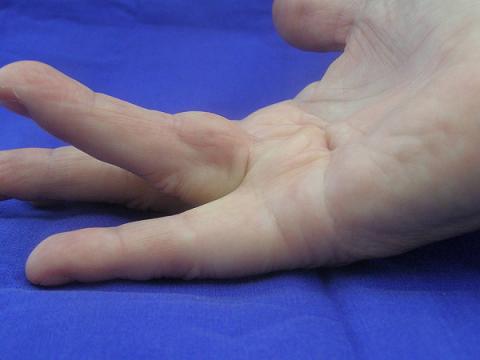 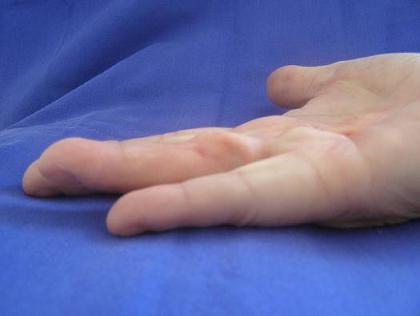 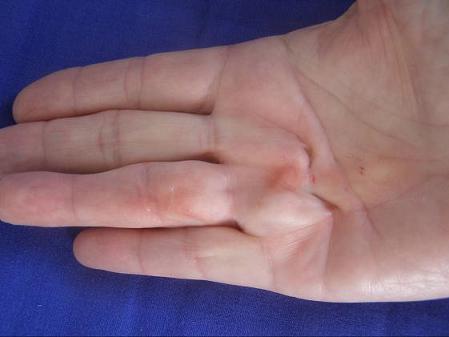 Palm of above hand immediately after NA, showing the still folded skin

due to Dupuytren's contracture and where needle was applied 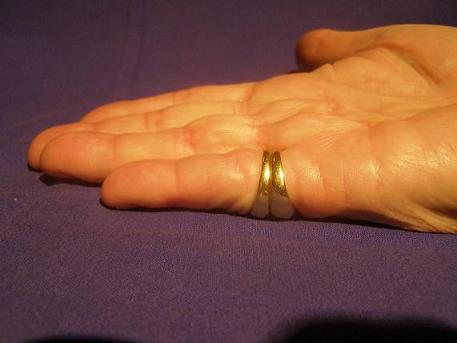 Above hand 6 months after NA. The finger is now nearly straight, the originally

strong cord became flatter. The patient had worn a night splint for 3 months. 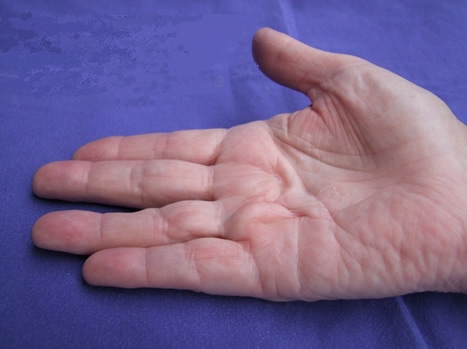 5 years after needle fasciotomy. The finger is still straight, no recurrence.

Skin folds have flattened. The patient had worn a night splint initially.

NA before and after  (from Ron,a patient who had NA. The video provides comments, and

shows Ron's hand before and immediately after NA, and two years later)

NA by Dr. Belcher  (3.5 min film showing the essentials in a close up)

While percuntaneous needle fasciotomy (abbreviated PNF or NA) is typically applied in stage 1 of Dupuytren's contracture it can also be a valuable therapy for progressed stages of Dupuytren's contracture. Even stage 4 patients have been treated successfully. In the example below (provided by K. Denkler) the MCP joint (base joint) has been fully released, the more difficult PIP joint (middle joint) remained at 35 deg extension deficit, yet overall a significant improvement for the patient. 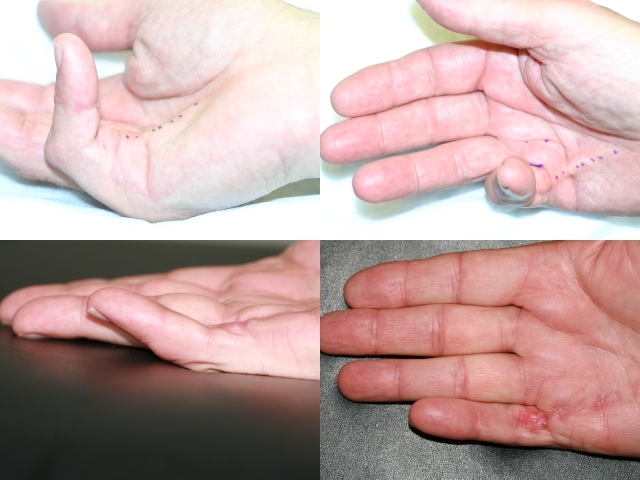 Treatment of Dupuytren's contracture in stage 4 with NA. Upper row: prior to NA. 70 degrees of extension deficit at the base joint and 65 degrees at the middle joint (total = 135 deg = stage 4). Bottom row: 8 months after NA.

A modified PNF technique, extensive percutaneous aponeurotomy, has been proposed that uses a surgical environment, a regional block (anaesthesia like in surgery) and injection of body fat (lipografting). Using a needle or similar device the cord is punctured with many superficial stitches (nicks) all along its extension. To avoid nerve damage this technique is not penetrating the skin very deeply, less than the classical needle aponeurotomy (NA) and does not attempt to fully cut the cord with the needle. The aim is to loosen the connection between the skin and the Dupuytren nodule and cord. After breaking the damaged cord by pulling on the finger the palm is injected with body fat that has been harvested elsewhere, typically from the stomach area. Pros and cons of this technique are still being evaluated. An overview was given by Roger Khouri at the 2010 Dupuytren's conference in Miami video. Benefits of this technique might be that the injected fat helps healing, restores a better padded finger, releases the connection between nodule and skin and thus might avoid recurrence better than NA. Yet a comparative long-term study is still missing. Initial data have been published by Steven ER Hovius et al. "Extensive Percutaneous Aponeurotomy and Lipografting: A New Treatment for Dupuytren Disease"  Plast Reconstr Surg. 2011;128(1 ):221–8 abstract.