Patients with knuckle pads often have a history of repetitive trauma related to sports or occupation. Knuckle pads are typically painless (though not always) and in most cases are thus only a cosmetic problem. Knuckle pads with solid, tumor-like masses over the joints seem to appear nearly exclusively with Dupuytren's disease patients while mere thickening and loss of skin elasticity appears equally frequently within the normal population (see below paper by Rayan et al.).

We are not aware of an established, generally successful therapy. Injection of corticosteroids (triamcinolone) can soften and sometimes even shrink the pads. Radiation therapy has also been reported to be successful in some cases but not consistently. One of our members had his knuckle pads surgically removed and is happy with the result because they were painful before and the surgery went without complications.

Knuckle pads were medically first described by Garrod in 1893 and are also named Garrod's pads. Example of knuckle pads (picture provided by A. Meinel, Dupuytren-Ambulanz): 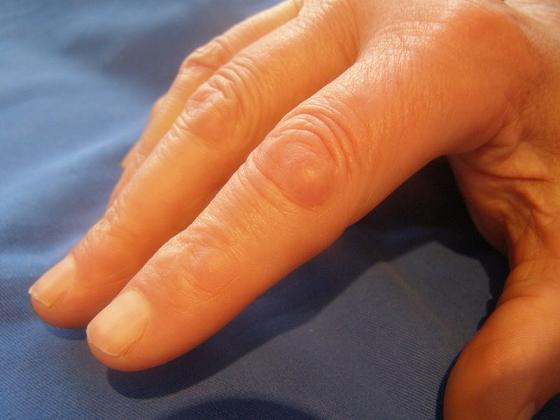 Garrod AE "On an unsual form of nodule upon the joints of the fingers" St Bartholomew's Hospital Report 1893;29:157-61. Full text available through Bibliothèque numérique Medic@ or from the Dupuytren Society.